2011 RoRys, Part Three - The Best of the Best in World Rowing 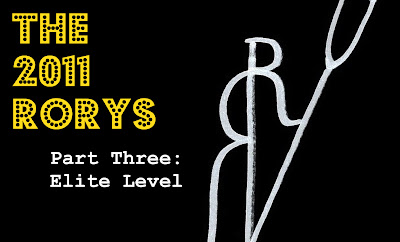 Today marks the final day of the 2011 RoRys, with our awards for the most impressive performances in international rowing be handed out to some outstanding athletes, coaches and programs. There is certainly no shortage of deserving candidates, and congratulations to all those who competed at the World level this year. And now, the 'Elite' RoRys go to...

RoRy for 'Programme' of the Year

Great Britain, Jurgen Gröbler, David Tanner
Phenomenal performance from the entire squad, across men's and women's open and lightweight events, 14 total medals, on pace for an unparalleled level of success in London next year. The women's eight has made significant improvements, moving past the Romanians and the Dutch to take the bronze medal this year (as we predicted), the women's pair continues to battle it out with New Zealand for the top spot on the podium, and the women's double of Katherine Grainger and Anna Watkins is looking nearly unbeatable going into London. Add to this the excellent performances from the M8+, M4-, M2-, and the lightweights (Hunter and Purchase proving that they have what it takes once again, Hosking and Goodsell on the podium in the LW2x, and a bronze medal from the LM4-), and you have the most dominant program top-to-bottom of any country in the world. Also, Team GB would likely have had a shot at 15 medals had the M2x of Marcus Bateman and Matt Wells not come down with a stomach virus during the regatta in Bled.

RoRy for Coach of the Year

Dick Tonks, Rowing New Zealand
New Zealand once again dominated the small boats, winning gold in the M1x, M2x, M2-, and W2-, with silver in the LM2x, and bronze in the LM1x, W1x, W2x, and W4x – an incredible tally for a small country and with most of the results coming in Olympic events. The Kiwis also proved that they are racers, winning come-from-behind victories in the M1x, M2x, and W2- in Bled, with perfectly timed moves and blistering sprints in each case. Clearly, these athletes are being prepared well for optimum performance on the day, and their training is instilling them with the belief that they can always give more when it counts most.


RoRy for Race of the Year

Rebecca Scown and Juliette Haigh of Rowing New Zealand
Scown and Haigh were trailing through 1500m in Bled, but were table to reverse the result from Lucerne and capture their second straight World title by just 0.08 seconds over the young duo of Helen Glover and Heather Stanning of Great Britain (click here to watch this race). This marks the second year in a row that the Kiwis and Brits have had a close battle, coming down to the line, and we look forward to seeing these two crews battle it out in Eton next summer.


RoRy for Breakthrough Performance of the Year

Mirka Knapkova, Czech Republic
Knapkova had a fantastic season, managing to edge the perennially competitive Ekaterina Karsten into second place at the World Championships in Bled, following a second straight Henley victory in the Princess Royal Challenge Cup and a bronze medal finish in Lucerne. Knapkova then went on to dominate the European Championships, winning the W1x at the event in Plovidv, Bulgaria by roughly eight seconds over the field.

RoRys for Athletes of the Year

Female Athlete of the Year: Alexandra Tsiavou, Greece
Alexandra Tsiavou has had a truly outstanding run, winning the LW2x with partner Christina Giazitzidou in runaway fashion in Bled in one of the most competitive events at the regatta, having found herself on the podium in every international competition she has entered since 2009 (this includes both LW2x and LW1x races). Tsiavou began the 2011 campaign by winning the Munich World Rowing Cup in the LW1x, and later backed this up with a second win in the LW1x in Lucerne. Following their win in Bled, Tsiavou and Giazitzidou dominated the field once again in Plovdiv, winning the European Championships by roughly five seconds.

Male Athlete(s) of the Year: Hamish Bond and Eric Murray, New Zealand
Yes, we know. But we don't think anyone is going to be separating these two for some time, and, let's face it, along with the German men's eight, they were the most untouchable combination out there on the international circuit this season. Beginning their season with a 14 second victory in Hamburg, Bond and Murray then won Lucerne by some seven seconds over the very talented duo from Great Britain, and then backed it up with a victory by roughly two seconds in Bled for their third consecutive World Championship title.

Congratulations to all 2011 RoRy winners for a fantastic year, and we look forward to seeing much more from all our RoRy recipients in the 2011-2012 season and beyond. Only 308 days until the Games begin in London!