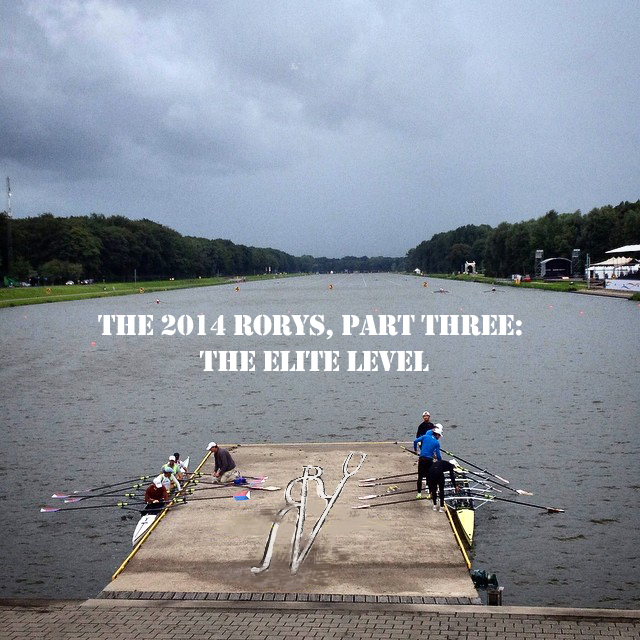 Can you believe we're already halfway through another Olympic cycle? The 'sophomore' season as we head toward Rio was filled with ups and downs, and wild turnarounds (and loads more prepositions) making for a great ride, as well as altering the competitive landscape from last year's World Rowing Championships in South Korea. And so, it is our great pleasure to reveal to you our picks for the 2014 RoRy Awards at the elite level...

RoRy for Program of the Year
Great Britain and New Zealand
Ok, before you go saying that this is a cop-out, there are just too many ways to slice it to leave Great Britain or New Zealand out of this category. Total number of gold medals? New Zealand. Total number of athletes winning gold medals? Great Britain. Most medals per entry? New Zealand. Total medal count? Great Britain. Crews with undefeated seasons? Check for both, etc. So, we felt it only right to award our prestigious RoRy for Program of the Year to both Rowing NZ and Team GB. As we said at the time, Great Britain was rolling (especially on the men's sweep side, as well as in the women's pair), and New Zealand was golden (in just about everything they entered—on that, more below).

RoRy for Efficiency
New Zealand
Well, duh. The Kiwis brought a total of 13 entries to Amsterdam, and 10 of those made the A final in their respective events (a rate of 77%—you can get a look at the percentages for most of the major federations in Daniel Spring's thoughtful write-up of the 2014 world championships). Of those 10 that made the A finals, six won gold—the highest total in Kiwi rowing history at the world championships, and good enough to top the medals table at the Bosbaan this year. Perhaps the ultimate example of efficiency: One crew (plus coxswain) took home gold in two separate events.

RoRy for Coach of the Year
Jurgen Grobler, Great Britain
Going into the 2014 World Rowing Championships, Grobler expressed confidence in his men's eight by putting his name on the entry. Apparently, he's still got it. Grobler's British squad is not only possessive of wicked top-end speed, but also a depth unlike anything this side of the U.S. women's national team—and even Tom Terhaar's bunch didn't pull off what Grobler's Boys did this summer, winning the men's eight and the men's four, and earning silver in the men's pair, men's coxed pair, and men's quad. And, while the men's pair may not have defeated the famed Kiwi combination, they posted the fastest time of any British pair, ever. Best of all, you can follow him (kind of) via his unofficial Twitter account, sealing the deal for top international coach in our minds.

RoRy for Race of the Year
Lightweight Men's Double, 2014 World Rowing Championships
The South Africans did it again! Anyone who's a fan of rowing will remember that epic Olympic final in London, when the South Africa LM4- came storming through to take gold at Eton Dorney. Well, two athletes from that four—James Thompson and John Smith—switched to sculling this year following a sixth-place finish in Chungju last season. Initially, it didn't work out so well, as the new-look duo was in the C final in Lucerne. Somehow, though, on the greatest stage, Thompson and Smith got it done again, coming through the class crew in the event, France's Jérémie Azou and Stany Delayre (reunited after a 2013 season that Delayre missed due to injury), to take gold by the narrowest of margins. And, adding to the overall awesomeness of this final—all three crews that medaled (South Africa, France, and last year's champs from Norway) finished within less than one second of one another, and all three broke the previous World Best Time in the event, coming through in 6:05 and change. (You can watch the race here.)

Breakthrough Performances of the Year
Kerri Gowler, Grace Prendergast of the New Zealand U23 Women's Pair, Senior Women's Four
These two athletes got everyone's attention quickly in the women's pair over the summer, and for very good reason. Gowler and Predergast have previous international experience, but finding the right combination has paid huge dividends, and the world took notice when they rocked up at the Lucerne World Rowing Cup and came within three seconds of edging Olympic champs Heather Stanning and Helen Glover of Great Britain. Then, they absolutely blew the doors off the event at the U23 world championships, winning by roughly 13 seconds over the field. The only problem for Rowing NZ: They already have a senior women's pair that is capable of winning a medal (which they did in Amsterdam). Not to worry—the Kiwis just slotted Gowler and Prendergast into a new-look women's four for senior worlds, and won gold ahead of the U.S. Yeah, that's a pretty good season, all right.

RoRys for Athletes of the Year
Male Athlete of the Year: Hamish Bond
This guy is flat-out phenomenal. Put him in a boat, and give him an oar or a set of sculls, and you can expect great things. Bond got the year started in the single, in which he defeated both Mahé Drysdale and Eric Murray on three separate occasions. Then, he and Murray hopped back into their familiar lineup, and continued their streak of world domination, only this time with a twist—they added a second event at the world level, and not only won it, but set a new standard for speed in the men's pair with coxswain that is likely to stand for some time. Yes, it's tough to single one athlete out of the Kiwi Pair, but we figure Eric won't mind given his being named one of the world's fittest athletes by Men's Health.

Female Athlete of the Year: Heather Stanning
Somehow, Heather Stanning has managed not to miss a beat, despite having been on active duty serving as a Captain in the 32nd Regiment Royal Artillery in Afghanistan (where she, according to the British Rowing website, "combined her military duties with a land-based training programme to maintain her rowing fitness") following her Olympic title with partner Helen Glover in the GB women's pair. Not only is she a certified BAMF, but also she just capped off an undefeated season at the highest level, rowing away from the field to gold in a new World Best Time of 6:50.61. Captain, we salute you.

And so, another year of the RoRy Awards is in the record books! Congratulations to all the winners, and we look forward to seeing you all continue to excel and elevate the standard of our sport for years to come! Now, the 2014-2015 season can officially begin.