The 2014 RoRy Awards: The Junior Level 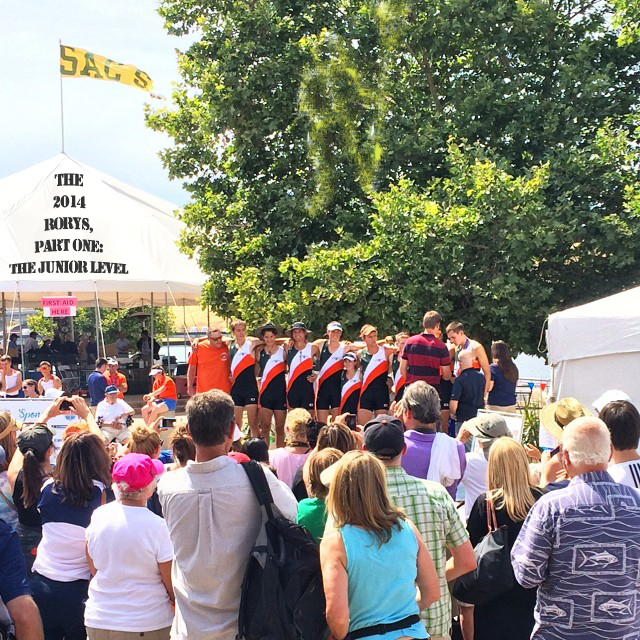 The 2014 season is now complete, and before we get started with the 2015 campaign,  it's important to take time to reflect on the outstanding achievements from another year of racing in our favorite sport (that's rowing, in case you need us to spell it out for you). This marks the fourth edition of our RoRy Awards (can you believe it?), and, since we cover three tiers of racing here at RowingRelated, we'll be recognizing and celebrating the best of the best at the junior, collegiate, and elite levels throughout the weekend. And so, without further ado, the 2014 RoRys for excellence at the junior level go to...

RoRys for Programs of the Year
Sculling: Seattle Rowing Center
2014 was another banner year for Conal Groom's Seattle Rowing Center squad, with multiple victories and podium appearances at the national level, as well as representation on the international stage at both junior and U23 worlds. The SRC team boasted a walk-away victory in the men's single, silver in the women's single, and three more gold medals in the men's and women's lightweight doubles and the men's heavyweight quad (in fact, SRC narrowly missed another trip to the podium in the women's quad, finishing a length back of San Diego Rowing Club for fourth place). Given the level of efficiency, it wouldn't be unreasonable to compare them to the Kiwi national team on the domestic level—if Groom brings crews to nationals, then you know that they are going to have a chance to win.

Sweep: Oakland Strokes
The Oakland Strokes program has been phenomenal for a number of years, and we felt it necessary to give them their second RoRy Award after an outstanding 2014 season on both the men's and women's sides. Not only did Derek Byrnes' women's program double up on titles again this year, winning both the lightweight eight and heavyweight eight (the latter by some seven seconds over the field), but the men's eight added a silver medal at nationals, capping off a spring that saw them win Southwest Junior Regionals ahead of Bay Area rivals Marin, and future national champions Long Beach Juniors. #oaklandloveit, indeed.

Rorys for Coaches of the Year
Sculling: Peter Sharis
Y Quad Cities head coach and Harvard alum Peter Sharis has brought his club to national prominence, thanks in no small part to his very gifted daughter, and a squad that is similarly efficient and skilled to that of Seattle Rowing Center. The Y Quad Cities program took home gold in the women's single (Elizabeth Sharis) and the women's quad—a lineup featuring sub-7 minute power in the stroke seat in Emily Delleman, as well as Stanford-bound Callie Heiderscheit. Clearly, Sharis and the Y Quad Cities program have been doing something right.

Sweep: Derek Byrnes
There goes that man again! What can we say? If you win both the heavyweight and lightweight eights at the national level twice in three years, then you're good at your job. Byrnes' program manages to train and develop a tremendous number of young women who go on to compete at top-tier colleges and universities, showing that he not only possesses the technical savvy to get the job done on the water, but also the program-management know-how (often an underrated quality) to create a successful, sustainable, large-scale club.

RoRy for Breakthrough Performance of the Year
Long Beach Junior Men's Eight
Despite fielding very competitive crews in the men's pair and men's four at Southwest Regionals, head coach Tom Graves, his staff, and the team as a whole chose to bring the eight—a crew that had finished a distant third in the region—to nationals. They felt like there was something there, and they wanted a chance at the most prestigious trophy on the men's sweep side. And, evidently, they were right. Long Beach came in firing on all cylinders from the get-go at nationals, posting one of the fastest times in the regatta despite having an open-water lead—and they more than backed up that performance in the final, which saw them win their first-ever national title in the men's eight.

RoRy for Race of the Year
Pacific Rowing Club Men's Four with Coxswain, Youth Nationals
Anyone who was on the beach at Lake Natoma that afternoon in June will remember this one. There were three crews, close to level-pegging, down the course, with favorites Belmont Hill leading the way followed by Deerfield Academy and Pacific—a crew that had to petition to get into this year's national championships, having finished a close fourth at regionals. Coming into the final 500m, Pacific, then in third, decided that they were not going to be denied. They put on a tremendous sprint to the line, edging Belmont Hill into second, with Deerfield rounding out the podium in third place. You could tell, even from afar, that it was one of those gut-check moments for the crew—they all decided that they wanted to win. It might not have been the prettiest rowing, but it sure got the job done.

RoRys for Athletes of the Year
Female Athlete of the Year: Emily Kallfelz
For those who don't know it already, Emily Kallfelz's story is truly remarkable. Put simply, Kallfelz didn't even start rowing seriously until April of this year (yes, April 2014), and yet, following a 7:09 performance at Crash-Bs (her first hint that she might just be very, very good at this sport) in February, she picked up sculling so well that she went on to take a very close third in the women's single at Youth Nationals. How good was her performance? Kallfelz finished just three seconds back of Elizabeth Sharis. Then, she went on to make the junior national team in the women's quad—a camp boat, coached by Günter Beutter, that finished 7th in the world. To say she's a natural is an understatement—and it doesn't hurt that both her parents rowed at Cornell.

Male Athlete of the Year: Ben Davison
Seattle Rowing Center's Ben Davison had a good summer. Kicking it all off with a double-victory at Youth Nationals in the M1x and the M4x, Davison went on to compete at not only the World Rowing Junior Championships, but also Under-23 Worlds, racing as the U.S. men's single, having competed in the U.S. JM4x in Trakai last year, where he finished sixth. Given his background and development at SRC along with Conal Groom and staff, we think there are big things on the horizon for Davison (and it doesn't hurt to be pulling sub-6:10 at 185 pounds, either).

Congratulations to all the RoRy winners at the junior level! Coming up tomorrow, check back for the RoRy Awards at the Intercollegiate Level, with our awards for the Elite Level to be posted on Sunday. And, in the meantime, you can check out past winners of the most coveted awards in rowing here.