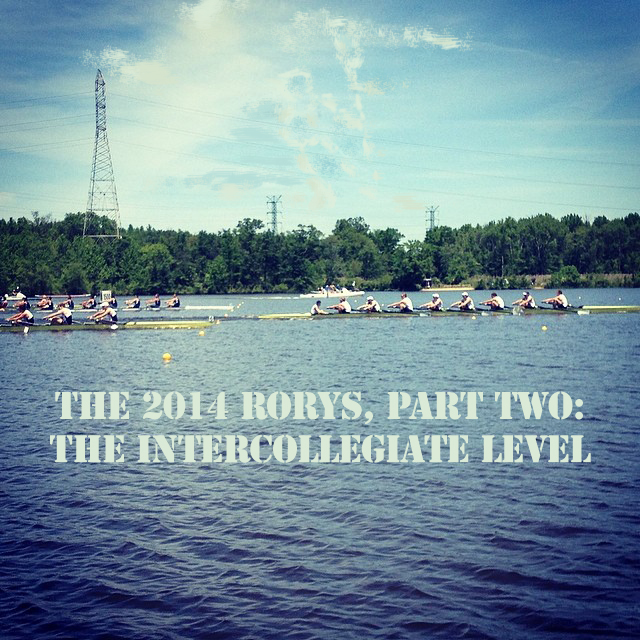 It's time for the second installment of the 2014 RoRys, celebrating the best of the best at the intercollegiate level. This year was marked both by dynasties continuing to stamp their mark, as well as by closely fought battles and emerging programs realizing their potential. And so, after much deliberation, and without further ado, the winners of the 2014 RoRys at the intercollegiate level are...

2014 RoRys for Programs of the Year
The University of Washington Men
What can we say? We know it's predictable, but you just can't argue with this pick (trust us, we tried). The Washington Huskies have racked up a bevy of results that are flat-out awesome in the modern era. The Huskies of recent years have been doing things no one has accomplished in 100 years at the IRA Regatta—as we said at the time:


The victory for the Huskies in the men's varsity eight was their fourth straight, and fifth in the last six years—a level of dominance at the IRA Regatta that hasn't been seen since Cornell did it from 1901-1907 (Syracuse won in 1908, and then Big Red rattled off four straight again from '09-'12).

Head coach Mike Callahan and his staff not only bounced back from losing Luke McGee to the U.S. national team last year, but also the loss of some outstanding athletes, including Canadian Olympic silver medalist Conlin McCabe, and still managed to produce a varsity eight that, for all intents and purposes, took the drama out of the IRA grand final. The result was their eighth (eighth!) straight Ten Eyck trophy, and another year in which every Washington athlete at IRAs returned home with a medal (this feat was matched only by Cal, but the Golden Bears placed third in the varsity eight, falling in the points to Washington by four, 192-188).

The Ohio State State University Women
Again, a predictable pick, but for good reason. Given the ever-increasing level of performance in NCAA rowing, that the Buckeyes were able to repeat as champions was an outstanding achievement. That they actually improved their performance from a year ago, even more impressive. Our hats are off to OSU crew for not only winning the team title, but also winning the varsity eight, removing any doubt even from the most hardcore NCAA-rules hater that the national championship belonged to the crew from Columbus.

RoRys for Varsity Coaches of the Year
Sean Bowden, University of Oxford
The Raiders' long-time owner said it: "Just win baby." And that's exactly what Oxford's Sean Bowden does. There's no consolation prize in the Oxford and Cambridge Boat Race, and Bowden has consistently put together the right combination for the sport's most venerable match-race. While the 2014 Boat Race crews heavily favored the Dark Blues in terms of pedigree and experience, that has not always been the case during Bowden's regime—still, outside of a mid-race disturbance and a restart resulting in a broken oar in 2012, Bowden has gone a long way toward evening the historical standings, winning nine of the last 14 races for Oxford.

Andy Teitelbaum, The Ohio State University
Yes, the Buckeyes are getting a lot of love, but they should be. Head coach Andy Teitelbaum had taken his crew tantalizingly close to the promised land on a number of occasions, finishing in the top 10 in team points in 12 of 13 seasons, before the back-to-back wins in 2013 and 2014. As we said following the NCAA Rowing Championships:


Last year, Andy Teitelbaum's Ohio State Buckeyes won their first national title as a team. Not only did that add significant plume to Teitelbaum's already heavily feathered cap, but also it marked a transition in the mentality of the program—it might sound simple, but the Buckeyes learned how to win.

This year, they apparently hadn't forgotten that lesson. Congrats to Teitelbaum and the whole staff at OSU—2014 not only marks back-to-back national titles for the Buckeyes, but also (and arguably more importantly) back-to-back RoRys for Program and Varsity Coach of the Year.

RoRy for Club Coach of the Year
Gregg Hartsuff, University of Michigan
Yes, Mr. Hartsuff is probably going to win this award a lot. But he deserves to. After a great 2013, Hartsuff had a very strong team this season (indeed, among the strongest on the erg since the 2007 Wolverine varsity eight), and the Wolverines didn't fail to reach their potential. Michigan won the men's varsity and second varsity eights at ACRAs; this after they narrowly missed a repeat win in the varsity eight at ECACs, immediately after winning Dad Vails. And the scariest part? There's a deep class of rising juniors this year looking to keep Michigan every bit as competitive this season.

RoRy for Breakthrough Performance of the Year
Radcliffe Lightweight Women
Heading into the IRA final, this year looked like a repeat of 2013 in the making, with the Stanford Cardinal—four-time defending champs in the women's lightweight varsity eight—leading the pack with a national title on the line. But it was not to be. Stanford six-seat and world record holder Christine Cavallo quite literally rowed herself unconscious in the final 10 strokes of the race in an effort to hold off the opposition, and Radcliffe's comeback sprint proved enough to slip ahead of the Cardinal in the final few meters (video of the sprint here). A remarkable race that saw the athletes from Radcliffe out-execute their West Coast rivals, and a tremendous step forward for the Black and White rowing program, coming off a record-setting performance at the 2014 EAWRC Sprints. Congrats to new head coach Lou Berl on an outstanding first season at the helm.

RoRy for Race(s) of the Year
The Pac-12 Championships Varsity Eight Finals
If you were on the banks of Lake Natoma for the Pac-12 Championships this year, then you were in for a treat. So much so that our award(s) for race(s) of the year both look back to the same stretch of water, on the same day—the men's and women's varsity eight finals in Sacramento were nothing short of astounding, for very different reasons.

On the men's side, it was a very determined Washington continuing to find the trump card in their continuing rivalry with California, as the two crews fought to get their bows in front all the way down the course—with 500 meters to go, it looked as if the Golden Bears might just have gotten the Huskies' number this time, but not so. The 'Dawgs' unleashed a sprint for the ages, recording their fastest 500m of the piece (a blistering 1:21.47) across the line.

As for the women's varsity eight final, the theme of parity in the NCAA rowing ranks is a recurring one, and in a power conference like the Pac-12, the fight for the top of the podium is intense. This year, one length determined whether you were on the podium or off it, as Stanford led the way in a time of 6:20.80, with Washington one second back, followed by Cal less than a second behind the Huskies, forcing a very strong USC varsity eight to settle for fourth just four ticks of the stopwatch from a Pac-12 title.

RoRys for Athletes of the Year
Male Athlete of the Year: Andrew Campbell
Another repeat winner is our selection for Male Athlete of the Year, and again, he's got the stats to back it up. While the Harvard Lightweight regular season may not have been on par with their best in recent years, the Crimson still managed a strong result at IRAs, with a surprise silver just behind favorite Cornell. Then, Campbell jumped back into his single, and repeated as champion in the BLM1x at the 2014 World Rowing Under-23 Championships. Not satisfied with this, he entered senior worlds looking to better his 7th-place finish last year—and he was certainly capable of doing so. Only a freak accident could keep Campbell out of the A/B semi, and that's what happened—Campbell flipped, and missed a chance at the medals. But, rather than sulking, he came back with a vengeance—not only did he win the third-level final by an impressive margin, but he set (even if only for a while) a new World Best Time in the C final. After the A final was in the books, Campbell's time was still the third fastest overall in the event.

Female Athlete of the Year: Aggie Nowinski
Golden Bear Agatha Nowinski had an impressive season, stroking the Cal women's varsity eight to a third-place finish at the 2014 NCAA Championships. But what she did over the summer was even more impressive—Nowinski not only stroked the victorious U.S. women's eight at the World Rowing Under-23 Championships, but also earned a silver medal in the BW2-, this time in the bow seat. A bronze medal at NCAAs (a year after winning the varsity eight with Cal) and two international medals in one summer is an accomplishment that needs to be recognized.

Congratulations to all the winners! Coming up next is the third and final installment of the 2014 RoRys—our celebration of the best rowers and rowing achievements in the world this year, with an in-depth look back at the elite level this season. Keep it locked!