Fall Season Review: Who's Ahead in the Collegiate Ranks as Winter Training Begins? 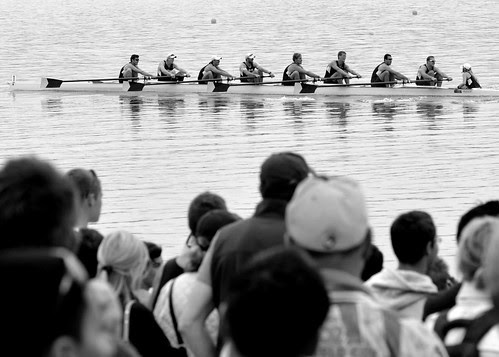 The fall racing season has drawn, in large part, to an end, and as we move into that 'long, dark, tea-time of the soul' that is winter training, it's time to take a look back at the best performances of 'Michaelmas term.' There has been a great deal of change in collegiate rowing this season, with the passing of legendary coach Harry Parker and the subsequent appointment of long-time Harvard Lightweight coach Charley Butt to the position of Bolles-Parker Head Coach for Harvard Men's Heavyweight Crew, and a host of new talent rising to the intercollegiate ranks after stellar junior careers. The fall also saw a handful of young programs challenging perennial contenders, no shortage of speed at the international level, and the first opportunities for rivals to lock horns (but hopefully not oars) on the water, setting the stage for what will surely be an epic spring season. Let's take a look, shall we?

Heavyweight Men
While the last two seasons have been utterly dominated by the University of Washington, this year the California Golden Bears may just have their number. Cal had a strong showing at IRAs last June, medaling in the second varsity eight and frosh eight, the open four, and the varsity four, and finishing fifth in the varsity eight—a race that may not have truly reflected their top-end speed. Given the increasing depth of their program, obvious from the results above, and their results so far this season—Cal edged Washington in the men's champ eight at the Head Of The Charles by the narrowest of margins, finishing eighth and fourth among collegiate crews—the Bears look to have continued to gain speed from last season, and are our early favorite to take the varsity eight title at the 2014 IRA Regatta. Harvard enjoyed a fantastic result on home water at the Charles, winning the collegiate title and edging out two French crews stacked with international talent—the Crimson are going through a period of adjustment, but they are certainly coping well and are also an early-season podium favorite. The track record that UW has amassed over the past several seasons cannot be ignored, and we expect the Huskies to be right back in the mix again this year.

We're also looking for Brown and Northeastern to be right on the edge once again, and potentially knock one of the above three off the podium—it was Brown last year that edged Northeastern into fourth place in the final 250m, further adding to what is a nice little rivalry building between the two programs. Northeastern finished a close second to Princeton at the Chase, roughly three seconds ahead of Cal—after some near-misses last season, Northeastern will be more battle-hardened and ready to take home some hardware. Yale's program continues to grow in depth and talent, and after knocking on the door to the grands last year, it may be Yale's season to crack the medal final.

Among ACRA and Dad Vail schools, it looks to be a similar story to last season, with Drexel, Michigan, and Virginia all continuing to field strong crews and deep programs. While they didn't bring a varsity eight to Boston this year, FIT's champ four entry finished ninth overall, and they backed up their results with a very strong showing at the Head of the Hooch, winning the men's champ eight, champ four, and open eight events over course of the two-day event in Chattanooga.

As was the case in 2012, Virginia is absolutely stacked. The Cavaliers have tons of depth, as they showed the rowing world at the Head Of The Charles and the Princeton Chase—UVa placed two crews in the top 10 in Boston (finishing first and seventh among collegiate crews), and no less than three crews in the top five at the Chase (yes, three crews in the top five), including another first-place finish for the Cavaliers' top boat. Heading into the winter, UVa are our clear favorites to win it all, and given their dominance thus far, it can hardly come as a surprise. Still, a lot can change between November and the first few strokes of spring racing season.

The Ohio State University, the defending NCAA champions, will be strong as well. Last year, the Buckeyes won both the varsity four and second varsity eight before their top crew claimed the bronze and sealed their first-ever NCAA Rowing team championship in Indianapolis. Teitelbaum's program is deep once again, and the Buckeyes are in the mix seemingly every season, having finished in the top 10 in team points in 13 of the past 14 years. Yale also had a very strong fall, finishing fifth in the champ eight at the Charles (second to UVa among collegiate crews), and second once again at the Chase, ahead of Princeton. Both Yale and Princeton also placed two crews in the top 10 at the Chase—as of now, it looks like the Tigers and the Bulldogs will be vying with likes of Washington, Cal, and Brown for the podium this spring. Brown will have great depth, and we all know John Murphy's stats when it comes time for championship racing season.

Lightweight Men
While Princeton ran away with the men's lightweight eight a the Head Of The Charles, Yale turned the table on the Tigers a week later on Lake Carnegie, and the Bulldogs are our early-season favorites this year. Look for Harvard and Yale to battle it out throughout the season, with newly appointed head coach Michiel Bartman changing sides of the Charles from his former digs at Radcliffe, and looking to impress in his first season at the helm. It will be an adjustment, and it's always a dangerous game making predictions at the lightweight level, but given Andy Card's ability to get his guys ready for the big race, we're giving the nod to Yale at this time. (Yale also placed two crews in the top ten at the Chase, taking first and eighth overall, with their B crew defeating A entries from Dartmouth, Columbia, and Georgetown—and Harvard because of a penalty.)

Lightweight Women
Like last year, we see this year's front runners as Radcliffe and Stanford, with the Cardinal coming off their fourth-straight IRA title. While the Cardinal lost Liz Fenje to graduation (she is now training with Oxford University Women's Boat Club for a chance at the Women's Boat Race on March 30th, 2014), they have gained frosh sensation Christine Cavallo, who set a world record at the 2013 Crash-B Sprints, going 7:05.7 as a junior lightweight. Harvard has a new coach—Lou Berle, a Trinity alum who has a solid resume including stints at Virginia and Ohio State—and momentum from a strong season last year. The Black and White took second in the women's lightweight eight at the Charles behind a Minerva crew made up of Dutch internationals, and were the first-place collegiate crew. Wisconsin is usually in the discussion, but hasn't found the necessary finishing speed over the last two seasons to keep up with their rivals.