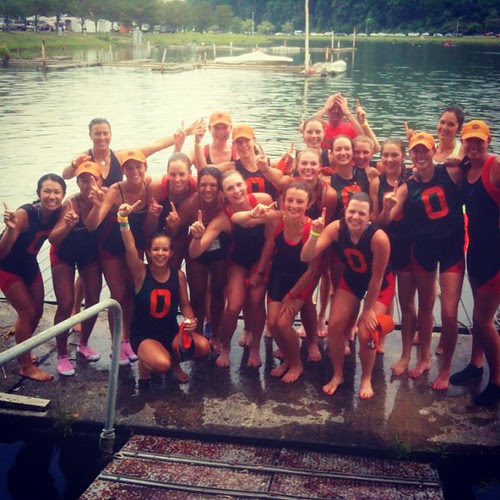 The racing is already underway at the 2013 USRowing Youth National Championship Regatta in Oak Ridge, Tennessee, and while the heats are in the books, there's still ample time to share our thoughts on just how the finals will shake out this weekend. As usual, youth nationals will showcase a broad base of up and coming talent—while we can't cover every event, here's a look at a few that stand out to us:

Women's Single
Last year's silver & bronze medalists—Elizabeth Sharis (Y Quad Cities) and Cicely Madden of CRI—are back in the mix, and have to be considered among the favorites to land themselves on the podium once again this year. Our top pick to take the event is Sharis, who earned silver in 2012 at just 14 years of age. Adrienne Bielawski (another heat winner) is a further athlete to watch—she has a strong rowing pedigree with her older sister, Nicole, having attended Princeton and competed at junior and U23 Worlds.

Men's Single
Our two favorites in this event are both doubling up—last year's winner, Chris Wales of Seattle Rowing Center, is back for more in the single and lightweight men's four (he won both his heats Friday), while 2012 youth national champ in the men's double (also a 2012 junior national teamer) Chase Buchholz is tackling the singles field this year as well as the men's quad (also winning both heats). The true test will be can these two maintain enough in reserve—both have the talent to come out on top. Ridgewood's Anthony Criscitiello also won his heat comfortably, and will be looking to grab some hardware to back up his bronze medal from 2012 in this event—given that he's not taking on more than one event, this could be his year to win it all.

Women's Lightweight Eight
Last year, Oakland simply owned this race, winning the national title by roughly 12 seconds. And, they got their 2013 title run off to a great start on Friday, posting the fastest time of the day in the event. Looking at the heat times, Saratoga, Connecticut, and Cincinnati Juniors will have a fight on their hands for silver—but we can't see anyone catching Oakland in 2013. The Strokes are simply too deep, and too talented.

Men's Lightweight Eight
It's hard to bet against Marin in this event—they're the defending champions, and at the 2013 Southwest Junior Regionals, they placed two crews in the top four in the lightweight eight. With so much depth and so many athletes to choose from, Marin is the clear favorite here like their counterparts Oakland on the women's side. Los Gatos took second in the Southwest region, and we think they'll be on the podium once again in Oak Ridge.

Women's Eight
While Oakland outpaced Marin last year, as well as recently at the 2013 Southwest Regionals, the Strokes will have to have everything going to defeat Marin for the national title—MRA head coach Sandy Armstrong knows exactly how to prepare her crews for the big moment on the big stage (as was surely noted, Marin posted the fastest time of the day in this event on Friday in a comfortable heat win), so watch out for upsets this weekend. 2011 silver medalists James Madison look to be back on form, with a second place finish in their heat (though with a very competitive time) behind Saugatuck. The battle for bronze will be intense, but again we can't see anyone keeping up with the two front runners.

Men's Eight
At the risk of sounding repetitive, Marin is again the favorite. After suffering their first loss since 2010 in the regular season at the hands of Long Beach (in the men's eight & four), Marin has bounced back and appears hungrier than ever to retain their title. Oakland finished second in the Southwest region, and had a fantastic heat on Friday—the Strokes are in fine form, to be sure, and we expect to see them on the podium this year, while Sarasota and Mt. Baker will duke it out for a place on the podium & CRI, Long Beach, Cincinnati and PNRA/Mercer will all be fighting tooth and nail for a place in the final and a chance at the medals.

So there you have it! It's not the first time we've said it, and it won't be the last, but better late than never! Good luck to all those racing in Oak Ridge—we'll check back in next week to see how it all played out on the water.

Photo: Oakland celebrates their double victory in the women's eight and women's lightweight eight in 2012