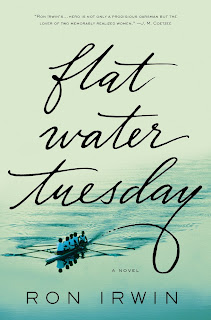 The NCAA, IRA, and USRowing Youth National Championships are all in the books, and school's out for the summer. And, for all you scholar-athletes out there, it's the perfect time to start thinking about your summer reading list. Naturally, being that we're pretty into rowing (and likely you are, too), books that involve the sport are generally more appealing.

Set on the East Coast of the United States, author Ron Irwin's Flat Water Tuesday tackles more than rowing, though the sport is at the heart of the narrative, and features a Boat Race, or Harvard-Yale Regatta, kind of rivalry between the main character's school, Fenton, and Warwick. Irwin's background includes experience as a rower at Kent School, and his prose draws you into a story that has a sense of awe and mystery, with a tinge of the irony that is born of reflection. The protagonist is one Rob Carrey, a filmmaker who splits his time between Cape Town, South Africa and the Eastern United States (much like the author himself), and who is an outsider, seeking to prove himself in unfamiliar and daunting circumstances. Irwin draws you in with a frame narrative that sets the stage—the adult Carrey receives a letter from his former teammate, John Perry, with whom Carrey hasn't spoken in years, and who has fallen on hard times. After receiving the letter in South Africa, Carrey returns to the U.S., and to the turbulent past that awaits him at his former school.

Now, here's where you come in.

Announcing the RR Flat Water Tuesday Photo Contest! We are giving away 10 advanced edition copies of Flat Water Tuesday, based on our picks for the 10 best photos submitted to us between now and Monday, 1 July, 2013. Here's the caveat—playing on the book's title, we are looking for the glassiest water in a rowing shot that we've ever seen.

To get involved, email us your submission to rowingrelated [at] gmail [dot] com, and make sure to include 'FWT Contest' in the title of your email. After the contest ends, we'll select the winners and create a slideshow with our top 10 picks/pics!

And now, here's the legalese:

Only open to residents of the 50 United States and the District of Columbia, age 13 and older. Employees, and members of their families, of Sponsor, its parent, subsidiaries, and affiliates, and its advertising, promotion and production agencies, are not eligible to enter. This promotion is intended for viewing in the United States only and shall only be construed and evaluated according to United States law. You are not authorized to participate in the Sweepstakes if you are not located within the United States [with apologies to our international readers!].

If you'd like to submit more than one image, that works for us, but no more than five images will be considered per person. Also, to state the obvious, the photo(s) must be yours.

Thanks very much to St. Martin's Press! Let the games begin! If you'd like to read more about Flat Water Tuesday, here's what people are saying on Goodreads.