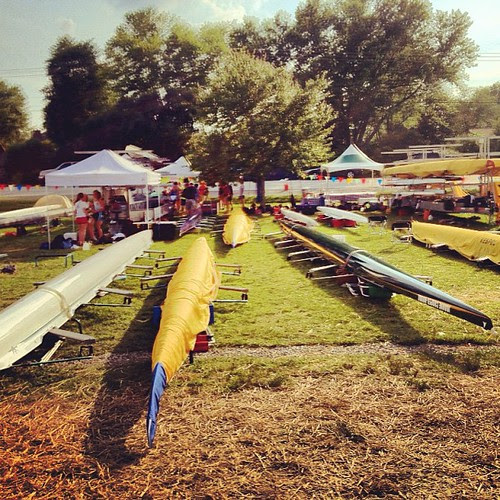 The 2013 USRowing Junior National Championships in Oak Ridge, Tennessee ran the gamut of emotion, from suspense, to sorrow, to utter joy—sometimes all at once. With weather issues affecting schedules, there were some athletes that perhaps didn't have the opportunity they'd hoped for when arriving at Melton Lake Park. Of course, I'm referring to the weigh-in situation, which saw four teams dealing the with the severe repercussions of missing a crucial deadline. In the words of USRowing Board President, and 2004 Olympic champion, Pete Cipollone:


Four coxswains out of 164 missed their weigh-in deadlines. Our Youth Nationals is an elite championship. The Rules of Rowing are clear. The referees applied them correctly and dispassionately. Two crews were excluded; two had substitutes available and dodged a big bullet. That is cold comfort to those whose seasons ended with one unfortunate incident.

To be excluded for a technicality is an awful thing to deal with as an athlete. While Cipollone has known that feeling of the greatest success one can achieve in our sport—an Olympic gold medal—he's also quite familiar with disappointment:


One coxswain ran to her mom, wracked and sobbing. It took me back to my own experiences as a young racer. I wanted to talk to her but would have broken down before any words got out. Decades later, my own memories—a broken rigger not far past 100m into a Stotesbury Cup final, the breakdown at the Sydney Olympics, and so many in between—are still too visceral and raw.

In some cases, crews dodged a bullet (two crews still raced with substitute coxswains), while others weren't so lucky. It's a very hard thing, but, as Cip says, "What I love most about rowing is that its lessons equip us well to succeed in real life. The path to victory is paved with teamwork and unremitting grit but absolutely no guarantees. We choose to row anyway."

Putting controversy aside, let's focus on some of the most outstanding performances from last weekend.

First off, congratulations to Narragansett Boat Club for a tremendous regatta, in the midst of emotional turmoil. As USRowing revealed following the racing, standout Chase Buchholz and his NBC teammates honored the memory of coach Peter Wilhelm's mother, Hope, with not one, but two gold medals in Oak Ridge. Buchholz started the day with a win in the men's single over defending champion Chris Wales of Seattle Rowing Center (more on him later), and backed that up with a second gold in the men's quadruple sculls—the boat having been recently christened in the name of Wilhelm's mother, Hope.

True to form, our pick for bronze in the men's single, Anthony Criscitiello, did just that, taking third place at nationals for the second straight year.

In the women's single, our pick to win, Elizabeth Sharis, couldn't quite hold off our pick for silver, as Cicely Madden of CRI took top honors in Tennessee this year following her bronze medal performance in 2012. Taking the bronze was Danni Struck of Stanford Rowing Center, but she wasn't done there—this small SRC squad of just 32 athletes sent 10 rowers to nationals, and brought home three bronze medals when all was said and done, with Struck winning a second bronze in the women's double along with teammate Victoria Wallace.


In the men's four, Andrew Black's very talented crew from St. Louis took first place ahead of a strong entry from Pacific Rowing Club—a noteworthy crew as well, given the fact that it included two defending junior national champions from the lightweight double in 2012, in the form of Jeff Wang (headed to Penn this fall), and Jovanni Stefani, racing in a heavyweight field this year. The always-formidable Marin Rowing Association took third in the event, with Mountain Lakes, Everett, and Milwaukee rounding out the final in that order. The women's four event saw a crew from Bromfield-Acton-Boxborough take a narrow victory over Holy Names, roughly two seconds away from gold. Blair took third, ahead of Capital, another strong crew from Pacific Rowing Club, and Manhasset, in that order.

The eights saw many of the usual contenders vying for the top of the podium, though the order this year did not (in most cases) align with last season! While Oakland took first place by open water in the women's lightweight eight, as we predicted, the men's lightweight eight event saw Evan Bainbridge's Los Gatos crew edge Bay Area Marin rival for the title, with Detroit Boat Club (founded 1839) claiming the bronze. One interesting note on the Marin entry—four seat Riley Overfield was the coxswain of the 2011 and 2012 national champion lightweight eight crews from MRA, and coxed the men's eight, coached by Graham Willoughby, at junior worlds last season. The women's heavyweight eight went to Marin—not to toot our own horn too much, but here's what we said going into the semis:


While Oakland outpaced Marin last year, as well as recently at the 2013 Southwest Regionals, the Strokes will have to have everything going to defeat Marin for the national title—MRA head coach Sandy Armstrong knows exactly how to prepare her crews for the big moment on the big stage (as was surely noted, Marin posted the fastest time of the day in this event on Friday in a comfortable heat win), so watch out for upsets this weekend.

The men's eight event saw Sarasota climb past their West Coast rivals to the top of the podium in convincing fashion, posting a 5:52 to win by roughly a length over Oakland, with our favorite to win, Marin, chasing in third place. Given the depth of talent and the growth of the program at Sarasota Crew over the past six seasons under head coach Casey Galvanek, there's no reason to think of this as a one-off victory. What will the landscape of junior rowing in 2014 look like? We can hardly wait to find out.