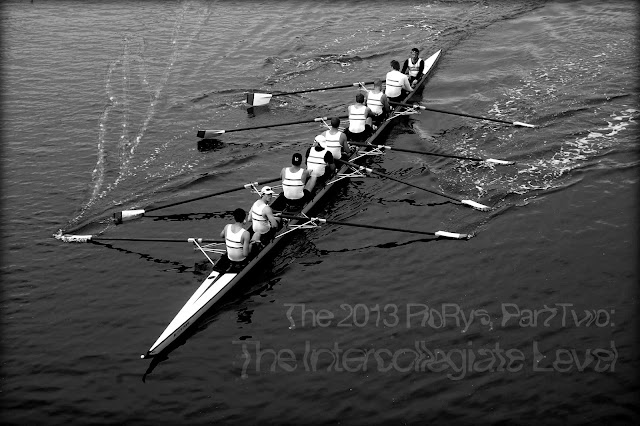 We're on to the next level of the 2013 RoRys, and there's a great deal to celebrate from the world of intercollegiate rowing this season. It was a season characterized by dynasties further adding to their incredible legacies, as well as of newcomers making a name for themselves at the highest level. And so, after much deliberation, and without further ado, the winners of the 2013 RoRys at the intercollegiate level are...

RoRys for Programs of the year
University of Washington Men
Despite losing one of the best coaches in the collegiate ranks—newly appointed USRowing men's coach Luke McGee—in the middle of the season, the Huskies of Washington showed that they were by no means ready to loosen their vise-grip on the Ten Eyck Trophy. Head coach Mike Callahan and assistant coach Rick Gherst not only stayed the course and pushed their athletes to achieve at the highest level, but also they did it while training new Husky coaches, who stepped up in the absence of McGee. Having begun their season with a victory at the Head Of The Charles, the Huskies then defeated Cambridge on the Thames in a Boat Race tune-up, before sweeping the IRA regatta for a second straight year.

The Ohio State University Women
Andy Teitelbaum has often seen his Buckeyes finish the season in the top 10 (in fact, Ohio State has finished in the top 10 in team points in 13 of the past 14 seasons), but this year his Ohio State squad would not be denied. Teitelbaum's crews medaled in all three events, with the Buckeye varsity eight taking bronze, while the second varsity and varsity four both won decisive victories in their respective grand finals. The Buckeyes also won their fourth Big Ten title, where Teitelbaum was named Big Ten coach of the year, and both Teitelbaum and assistant coach Diana Albrecht were named CRCA coach and assistant coach of the year for Division I.

RoRys for Coaches of the Year
Andy Teitelbaum, The Ohio State University
Not to be repetitive, but that was one heck of a season for Teitelbaum and the Buckeyes. In addition to the above, it should also be noted that the second varsity had an undefeated season, and that the Buckeyes swept the NCAA events at their conference championships by open water.

Harry Parker, Harvard University
He was one of the most celebrated head coaches in our sport for a reason, and this season was yet another example of what made him so special. Despite battling cancer, Parker guided yet another Crimson varsity eight to an Eastern Sprints title, following another undefeated regular season, and finished the year with a silver medal at the IRA Regatta, and a sweep of Yale at Red Top—Parker's 44th victory over the Bulldogs in 51 tries. He was, quite simply, a legend in his own time.

RoRy for Club Coach of the Year
Gregg Hartsuff, University of Michigan
The Michigan Wolverines had a season for the ages. Head coach Gregg Hartsuff has been at the top of collegiate club rowing for many years, despite rising challenges from a number of growing programs. After suffering a minor setback in the grand final of the men's varsity eight at Dad Vails, the Wolverines then drove up to Worcester, where they dominated ECACs, sweeping the men's eight events. They then carried that momentum into ACRAs, where they reclaimed the title in the men's varsity eight over rival Virginia, and added a second gold in the men's second varsity eight as well.

RoRy for Race of the Year
Northeastern v. Brown for the Dreissigacker Cup
While the 'other' Huskies have been on our radar for some time now, this was the race that really proved that what had been a young, talented, but inexperienced squad was now ready to take on the cream of the crop in collegiate varsity rowing. The Huskies headed to Providence to take on Brown on the Bears' home course, and fought off two late surges from an outstanding Brown varsity eight to defend the Dreissigacker Cup. In the end, the Huskies held off the Bears by just 0.4 seconds in a time of 5:26.1, setting up a new rivalry in the Northeast that extended through IRAs and will surely continue into the 2013-2014 season.

RoRy for Breakthrough Performance of the Year
Northeastern Men
The 2013 IRA Regatta marked the first time since 2005 that the Huskies of Northeastern had placed both the varsity and second varsity eights in grand finals, with the varsity eight just 0.2 seconds from the podium. John Pojednic, Ted Benford, Dan Walsh, and the whole staff at Northeastern have a lot to be proud of, including another gutsy performance in the final of the Ladies' Challenge Plate at Henley Royal Regatta, where they pushed a GB development crew—one that in most years would not have been allowed to race in that event—all the way to the line, only to lose by a canvas in a race that set a new course record of 5:58. As we said following IRAs in June, look out for Northeastern in 2014.

RoRys for Athletes of the Year
Andrew Campbell, Harvard University
While the young Andrew Campbell's resume is certainly not short on honors already, Campbell's 2013 season was his best yet. Having narrowly missed a bid for the 2012 Olympics, Campbell returned to Harvard, where he and the Crimson lightweight men racked up yet another undefeated season, culminating in an IRA title. But Campbell wasn't done there—picking up a second oar and jumping into the single, Campbell won the BLM1x in Linze, Austria, and followed that up with a seventh-place finish at senior worlds in Chungju. All we can say is, it's going to be fun to watch Andrew try to top that in the upcoming season.

Heidi Robbins, Princeton University
Heidi Robbins is, without question, one of the best athletes in the collegiate ranks. Want proof? Having won gold in the women's eight at the 2012 World U23 Championships, she returned to Princeton and stroked a very quick women's varsity eight to a silver medal finish at NCAAs this season, and later followed that up with a new world best time of 5:54.16, this time in the stroke seat of the U.S. women's eight at World Rowing Cup III in Lucerne. Robbins likely would have earned a second international gold medal this summer were it not for a back issue that precluded her from racing in Chungju, where the U.S. women's eight again dominated. All best to Robbins for a fantastic 2013-2014 season!

Also worthy of mention (though not quite fitting into the above categories) are the Stanford lightweight women, who made it four straight IRA titles this year, despite never having been granted a No. 1 ranking entering the regatta. Evidently, the Cardinal likes it better that way—and hey, if it ain't broke...

And with that, the 2013 RoRys for the intercollegiate level have now been presented. Congratulations to all the winners for your outstanding achievements this year! Coming up next are the RoRys for the best of the best at the elite level, to be posted this Sunday.