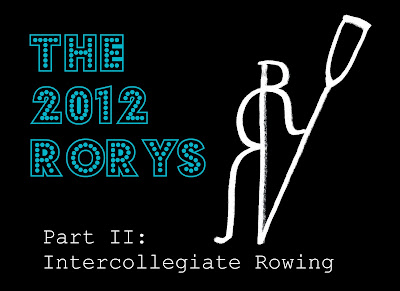 Day two of the 2012 RoRys celebrates the best of the best in collegiate rowing, and this year we've divided the awards into two separate categories, for varsity and club teams. There were a number of phenomenal races and outstanding performances during the intercollegiate racing season this year, so picking out only a few is quite a challenge! However, we must be selective, and so, here are the 2012 RoRy winners at the collegiate level:

RoRys for Varsity Programs of the Year
The University of Washington Men
Yes, we picked Harvard to win the IRA this year, but maybe that's just the kind of motivation that the Huskies needed to take a second-consecutive title, along with an unprecedented sixth straight Ten Eyck trophy this year. Not only did the Huskies have dominant speed from top to bottom (setting a new course record in the frosh eight event), their performance in the varsity eight was nothing short of amazing, crushing the final in a time of 5:21.482–just over two seconds shy of the world best time in the men's eight set by Canada this year in Lucerne. Mike Callahan and Luke McGee have a great thing going, and will look to defend their title in the 2012-2013 season, with Olympic silver medalist Conlin McCabe reentering the fold at the Conibear Shellhouse.

The University of Virginia Women
Our pick to win it all from January onward, the Cavaliers didn't disappoint, and showed impressive top end speed at the NCAA Championships on Mercer Lake. Led by former GB senior national team rower Sarah Cowburn, the Cavs had a fantastic campaign, and made the varsity eight final considerably less interesting this year than last, winning by roughly a length over the field. The dynamic duo of Kevin Sauer and Steve Pritzker has since broken up, with Pritzker taking on the head coaching role at Iowa, but the Virginia women, too, will likely be back in the mix in the coming season.

RoRy for Club Program of the Year
Grand Valley State University
Under the watchful eye and guidance of head coach John Bancheri, GVSU had an excellent season this year, on both the men's and women's sides. The Laker men's varsity eight, featuring novice rower Nate Biolchini (17th at C.R.A.S.H.-B.s this year with a 6:06.3), got the season started right with a great win at the San Diego Crew Classic in the Cal Cup in April, and backed that up with a defeat of Michigan at the Lubbers Cup Regatta, while Bancheri's women's program won an ACRA title in the varsity eight on Lake Lanier, GA.

RoRys for Varsity Coaches of the Year
Men - Paul Cooke, Brown University
The Brown Bears had a fantastic season, bouncing back from and early season defeat at the hands of Washington, and rowing down the previously undefeated Harvard varsity eight to take home the Eastern Sprints title in dramatic fashion (for more, see the video posted below). They then backed this up with a strong silver medal performance at IRAs, and again at Henley Royal Regatta, where they stepped up to the Grand Challenge Cup with alum Jamie Koven's blessing, and proceeded to make the final, where they battled well against a very strong California Rowing Club crew featuring several senior national team veterans.

Women - Al Acosta, Stanford University (Lightweights)
Maybe next year the Cardinal will get a No. 1 seed entering the IRA, but, then again, playing underdog hasn't stopped them yet. Al Acosta quietly guided his Stanford Cardinal to their third straight IRA title this year in the varsity eight, and added a silver medal in the lightweight four for good measure. Congrats to the Stanford Lightweight squad on another successful campaign, and hats off to Acosta for his consistency and execution!

Club Coach of the Year
Frank Biller, The University of Virginia
Despite losing several of his most talented and influential rowers for the 2011-2012 season, Biller's UVa Cavs made it back-to-back ACRA national titles in the men's varsity eight, this time winning a nine-boat grand final on Lake Lanier, and breaking the course record in the process (NB: Lake Lanier hosted the 1996 Olympic Games). Also, Biller guided UVa rower Jonathan Furlong to a U23 Trials win in the lightweight men's single. Biller's training program and team structure have combined to build what is now a legitimate powerhouse in men's club rowing.

Race of the Year
Brown defeats Harvard to win men's varsity eight title at Eastern Sprints
This was a hum-dinger, as we Yanks say. The race came down to the sprint, and just when it looked like Harvard's long, loping rhythm might just give them enough of an extra gear nearing the finish, Brown cranked up the rate still further and refused to be denied. No further explanation necessary–just take a look at the video below:

RoRy for Breakthrough Performance of the Year
Humboldt State wins NCAA DII Title
The Humboldt State Jacks entered the 2012 NCAA Championships as underdogs, but they had already defeated the vaunted Western Washington Vikings once during the championship season, taking the varsity eight title at the Northwest Conference Rowing Championships. After suffering a setback at the hands of WWU at WIRAs, the Jacks looked poised and ready at NCAAs, and when the moment was right, they made their move in the grand final, winning the varsity eight and ending a seven-year streak for Western Washington, having already won the fours title earlier in the day. The victory capped off Jacks' head coach Robin Meiggs 18th season at the helm.

RoRys Athletes of the Year
Rob Munn, The University of Washington
Munn was a team captain and true leader with the Washington Huskies this year, and was among the top performers on the erg on what was an outstanding team. He rowed on the varsity eight that captured the IRA title and set a new course record, and then raced to a gold medal in the men's eight at U23 worlds in Lithuania in July. An outstanding athlete, plain and simple–just looking at his 6k from Fall West Coast Speed Order 2011 (18:58.5, which placed him ahead of 2012 Olympians Henrik Rummel, Giuseppe Lanzone, Jake Cornelius, Charlie Cole, and Scott Gault) is enough to tell you that Munn was among the top athletes in the U.S. not only at the collegiate, but also the elite level this year.

Felice Mueller, The University of Michigan
Named Michigan's 2011-2012 Athlete of the Year, Mueller became the first rower in school history to win the award. Having started her international rowing career with the junior national team in 2007, Mueller went on to win back-to-back U23 titles in the women's pair, and set a new world best time with partner Grace Luczak on the Bosbaan in 2011 (when she also took bronze in the BW8+). This season, Mueller rowed on the second place Michigan varsity eight at the NCAA Championships.

Congrats to all the winners! More to come tomorrow, with our final round of 2012 RoRys on the way–who will take home the prestigious RoRys for Athletes of the Year at the Elite Level? Stay tuned.