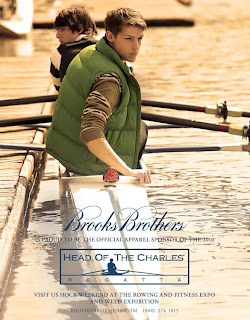 The sport of rowing is certainly on the 'preppy' side, and God love Brooks Brothers for sponsoring a rowing event -- it's also a sport that could be described, in financial terms, as a 'money hole.' But if you are going to run a rowing-centered ad campaign at perhaps the most well-attended rowing event in the world, at least take the time to talk to someone who knows something about the sport, so that your poster doesn't come out looking like this.

It's certainly understandable that the models were only allowed to use a 15 year old Filippi (look at the wings), which is probably soldered to the dock to prevent the adolescent with the 'steely gaze' from falling in and becoming hopelessly entangled in the massive vest he has chosen for his morning outing. Not only that, but it appears that he is wearing jeans, all of which combine to further confirm the misconceptions of the general public regarding the sport already so ingrained by movies like The Skulls and others. Next time, before giving me Ashton Kutcher wearing a parka, maybe hang out at the river for a while and get a sense for why rowers have such a love for all things spandex.

Then again, I guess they're not trying to sell unisuits.

It's undoubtedly more financially viable for them to appeal to a non-rowing audience, which begs the question, why buy ad space in Rowing News? Don't get me wrong, I'm happy they did, but any rower who sees the ad will have a laugh at the final product.

As I said, bless them for sponsoring such a great event, and I think the rowing community should appreciate the exposure. And speaking of rowing in the media, I need to take a look at the rowing scenes in The Social Network -- I've heard good things...
Labels: Head of the Charles humor rowing films rowing in the media