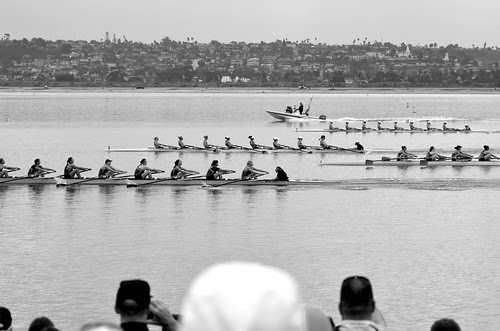 The 2013 NCAA Championships are set to take over Eagle Creek Park, Indiana, and it just wouldn't be us if we didn't express an opinion or two regarding what we're expecting to see out there on the water. Here's our analysis going into the racing this weekend:

Division I
California was our preseason No. 1, and California is our favorite to win the NCAA team championship. The Golden Bears' varsity four and second varsity eight have been very quick all year, and in our opinion Cal's varsity four may be the best in the country. The only question this weekend in Indianapolis will be, can the varsity eight get the job done? The Golden Bears will likely have a new lineup this weekend following a surprise third place finish at the Pac-12 Championships behind No. 1 USC and then No. 5 Washington—while we feel it's unlikely that Cal will win the varsity eight event, we're confident that they'll be enough in contention with the top crews to earn the Bears the team title this year after a narrow miss last year (behind Virginia and Michigan).

USC also has a great chance to win the team title, if their four can make the A Final—after all, they're the No. 2 team in the country according to the latest CRCA Coaches' Poll (behind Ohio State), and will enter an as-yet undefeated varsity eight into the fray in Indianapolis. Further teams to watch: Princeton and Ohio State will also be in contention and are likely to place all three boats in A Finals; Brown's second varsity and four just won at the Ivy League Championships, but as has been the case all year, it's hard to know what to do with the Bears—the Brown varsity & 2V have had erratic results, while the varsity four has been strong all year (will the Murphys shake up the lineups after a tough outing for the varsity eight at the Ivy League Championships?).*


Varsity Eights:
Our pick to win the varsity eight is USC. The Trojans are undefeated this season, and won the Pac-12 Championship by roughly five seconds—a tremendous feat considering the depth and competitiveness of the conference. Our other podium picks for the varsity eight title are Princeton (coming off a commanding win at the Ivy League Championships roughly seven seconds ahead of Yale), and last year's NCAA team and varsity eight champions, Virginia.

Second Varsity Eights:
Ohio State is our top pick to win the second varsity eight event. The Buckeye crew is stroked by B1G co-freshman of the year Catherine Shields—a Kiwi with a great deal of international racing experience under her belt already in her young career—and hasn't been touched all year. However, look for California to be very strong in this event as well—the Bears may give the Buckeyes a serious run for their money.

Varsity Fours:
Undefeated California is the fastest crew in this event. Brown's all-freshmen four including former junior national teamer Logan Harris (formerly of Marin RA, who posted a 7:10 at Crash-Bs earlier this year) and Signe Henderson (formerly of Berkeley High School, 7:15 at Crash-Bs), may be their top challenger, based on the results so far this year.

Division II
Barry are our favorite to win, Nova Southeastern and Western Washington will likely be in contention. Barry has emerged as a force to be reckoned with at the DII level, proving that point emphatically with a victory over Nova Southeastern at the 2013 Dad Vail Regatta by roughly one length. Nova has had a solid season, including a fourth-place finish at SIRAs and a silver in Philadelphia.

Division III
Williams, Williams, Williams—another great season from the Ephs, who'll be looking to make it eight-straight NCAA DIII titles in Indianapolis this weekend, but have seen Bates continue to emerge as a tough challenger this season, remaining in contact with the Ephs in the varsity eight at both NERCs and ECACs this year—can Bates pull off the ultimate upset?

Of note: You never know what's going to happen with the conditions in 'Windy Indy.' The conditions may play a role, and there is always the chance that they could affect the outcome (there were whitecaps on the course on Tuesday afternoon, with thunderstorms predicted during the racing this weekend). We'll be keeping a close eye on the forecast as the racing gets underway!

*[Updated 9:37pm PDT] Before the racing gets started, we wanted to add that Washington is also likely to be among those teams placing all three boats in A Finals this weekend—the Huskies have had a tremendous season to date, and have shown that they can perform in tight racing on a big stage, with a silver medal at the Pac-12 Championships just two weeks ago. (Also, Washington was our preseason No. 2—they may just prove us right in Indianapolis.)
Labels: collegiate rowing NCAA Picks predictions